When you’re too poor
to buy a horn, machete the tubing
on the water hose and blow,
as my brother did. Why
should the rich monopolize
music? Those of us who grew up
where dodging bullets taught
a new form of modern dance,
professional drum sets were
out of the question. We’d build
new instruments from garbage,
especially percussion, and swarm
into the city, a marching band
bludgeoning mallets against

the oppressive Germanic orderliness
of a police state already in place
by 1947. “Madmen” do you call us?
Very well. Then madmen we shall be,
raucous and loud, atonal as the Asian

immigrants who built railroads,
African as the slaves bleeding
from picking cotton, Mexican
as a marimba among the orange
groves, a mix of nations
holding America accountable
for its “ritual of dream and 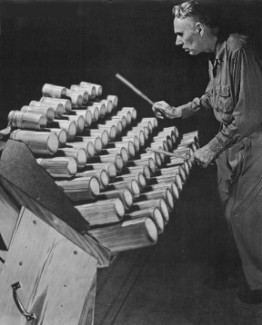 delusion,” in a opera not for
monarchs and merchants, but
for hobos riding the rails, for
homeless hovels beneath
city bridges, for women
hiding battered in shelters
and for male hustlers packing
for a meal, so we may all rise
together, in Dionysian frenzy,
and take back what was ours.
[Disposable Poem August 8, 2015]
Dr. Mike 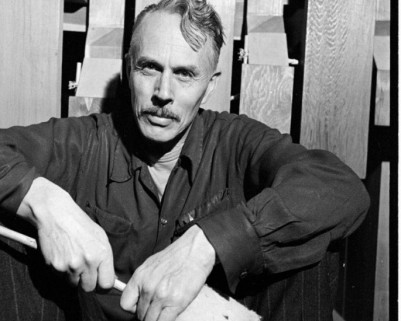 Parch your thirst with this Harry Playlist!

Sit in on a set with this Harry Partch lecture given at the University of Hawaii.

One thought on “Disposable Poem August 8, 2015: Homage to Partch – After Harry Partch”