Island of Lost Souls (1932) 71 Min. Erle C. Kenton directed Philip Wylie’s adaptation of H. G. Welles’ The Island of Dr. Moreau in this Pre-Code horror from Paramount Pictures, in which a man (Richard Arlen), thrown off a ship, finds refuge on an obscure island where a doctor (Charles Laughton) is transforming animals into humans.

Written as a pamphlet against

Vivisection of animals, it sold

As sci-fi allegory that quibbled

It was banned in England.

Sailing halos around his girth, 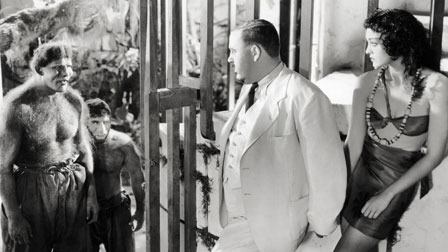 As he grinned at a gorilla.

His surgeon’s hand was firm

On raw meat. His natural selection,

Mutilations that he skinned

To release the human inside.

Quite pleased with himself,

To the shipwrecked white hunk

Whom he eyed with wary adoration,

Wondering if a transgendered woman

Could fool a sailor into bed,

Oscar Wilde into this character

Whose trial Welles had attended.

The House of Pain refreshed Moreau;

he enjoyed the screaming things.

But did Moreau really die?

He became the Eucharist for

Who sang about “De-Evolution,”

And then inspired The Mystic Knights

“What is the law? No spill blood!”

Look among you. How many

Are still animals beneath your skin?