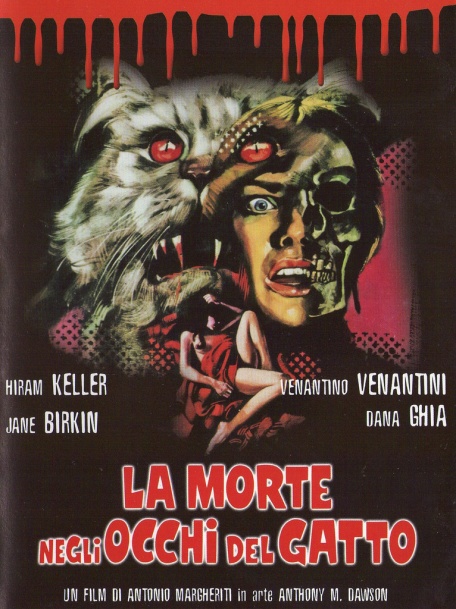 La Morte negli Occhi del Gatto (1973) Also known as “Seven Deaths in the Cat’s Eye.” Anthony M. Dawson [Antonio Margheriti] directed this cult classic, a collage of horror motifs intercut with images of a cat, just before claws slice the next victim’s neck. Gallo films revel in the charm of an illogical nightmare. Jane Birkin stars as the distraught female and Hiram Keller as the romantic lead, with supporting appearance of Serge Gainsbourg as the inspector.

The nuns kicked her out.

Not even her mother knew for sure

What she did for all the girls at school.

First there was a ginger cat

In the basement of Dragonstone Castle

In the Scottish highlands.

Then the cat came back,

Jumping on her mother’s coffin,

Medium for a vampire.

Everywhere you looked, the cat

Had fish eyes for hidden passageways,

Nipping on a virgin’s neck.

The Lord was romantically insane,

Caged with an orangutan.

The bisexual scene was edited out.

The cat came back, snarling, clawing.

Mother was in the basement

Being eaten by rats.

All cats were one cat but did not look alike.

If it’s a rectory cat, then the killer

Must be some priest in Rome.

How much Gallo could a cat lap up?

So the family could murder one another.

Someone set the orangutan loose.