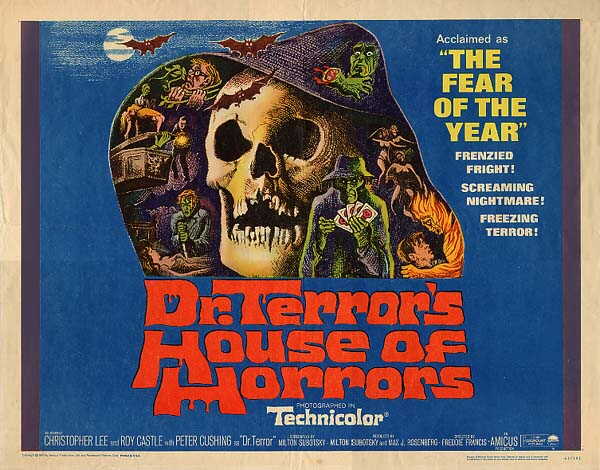 Dr. Terror’s House of Horrors (1965) Freddie Francis, famed Hammer Horror Film director, showcases a collection of four supernatural tales dealt from Dr. Terror’s tarot cards. The great Peter Cushing plays Dr. Schreck [a name all horror fans know as the actor who created the role of Nosferatu]. The cast includes. among others, Donald Sutherland as a newlywed and Christopher Lee as a snot-nosed art critic. Written by Milton Subotsky, this is the first in a series of horror anthologies from Amicus Films.

Tap three times on the Tarot pack to find

The deepest terror lurking in your mind.

Deal four cards, with one in reserve for last,

As if you could ever escape your past.

Your future is what you will never know.

An architect on the Scottish isle scans

His former estate for those newest plans

A widow requested who bought his home.

He knocks out two doors to discover the tomb

Of his clan’s arch-enemy, Valdemar,

A werewolf the widow sealed up with pine tar.

Inheritance brings with it grievances too.

There’s no accounting for a Folie à deux.

In a vegan’s garden, strange with bamboo,

Bureaucracy strangles on its kudzu,

Which is why recalcitrance writhes in the South

Where uncommon hybrids are treated uncouth.

Allowing no escape from ancestral lines.

Soon they will all catch fire in this coven

As the Ministry of Defense moves in

To defoliate immigrants with toxins.

Whose heritage was less voodoo than shine;

His cornet peaked at a soprano topaz.

No white guy should ever compete in jazz.

And hock those rhythms on the world wide web.

Of cryptic tremors in tribal groundswells 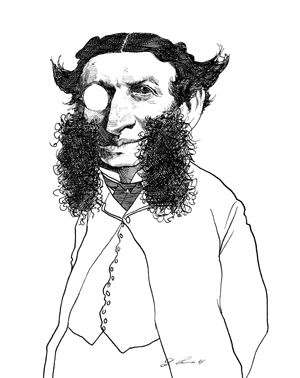 To find who belonged in the pantheon

And who should be run over by a Ford Crown.

With rigorous hauteur, this expert

Ashamed, he took revenge in what he wrote.

For being indifferent, had him choked.

She flew off at night, and then she flew back,

Refreshed from some local’s supple neck.

She had always wanted to have children

But her husband hated her menstruation.

He staunchly refused to perform his part,

And then he drove a spike in her heart.

Some blood-sucking doctor confirmed his crime.

Typical male, he knew whom to blame.

Tarots can no more change a ghost channel

Than charge for sun on a solar panel.

Wishful thinking from writers tells you this

To silence censors of neurotic bliss.

All disembark from their derailed train

The last Hanged Man card is always the same.