Tobor the Great (1954) Opening with an atomic blast to remind audiences of the communist threat breaking out in the Korean War, Lee Scholem cranked out this kiddie flick that explores the psychic relationship between a boy [Billy Chapin as Gadge] and his robot. Robert Kinoshita, having been interred in a Japanese camp in America during WWII,  designed Tobor as a giant deep sea diver with Olympic rings around his neck, and Christmas tree light bulbs for eyes. This costume set the standard for his later robots, like Robbie the Robot in Forbidden Planet (1956). Befriending Tobor, Billy Chapin draws on the same talent that would make him as sympathetic as the pursued child in Charles Laughton’s terrifying The Night of the Hunter (1955). 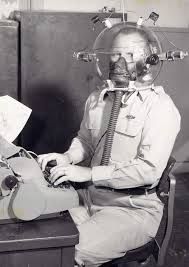 Learning to numbers that can be fed

Through a Scantron for computing

Grades that avoid any overhead.

From whoever has the most warheads.

Science is consensus on certainties

That agree with religion’s godheads.

That AI will succinctly collate.

The answer to Kafka is tuberculosis

Or neurosis, not totalitarian police state.

It’s paint by numbers or repeat after me

For a Fine Arts or a Spanish degree.

In internet courses, nothing gold will last,

For those who work better with their hands,

And the mercenary military fans

Out adrenaline in abrupt gunshots.

A boy and his bot can share quite a lot. Through the unconscious proletariat,

Speaking to their lowest denominator.