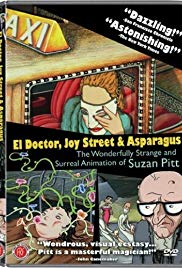 Asparagus (1979), Suzan Pitt’s first breakthrough animation, and Pinball (2013), her last animation, showcase amazing accomplishments celebrating independent filmmaking. On the CalArts Web site, Maureen Seawood wrote, “She [Suzan] believed that within us, we had the ability to unfold the way we dream. That each image leads us to the next image, giving birth to dense, often hyper-illusionistic scenes. She gave us her theatrical dreams through work executed with extraordinary self-control—showing us that written or verbal language was inadequate.” Clearly it’s time to reissue her complete works on DVD, including the remarkable “El Doctor” and “Joy Street.” Her original paintings led to her animation which led to painted art coats.  In all forms that her art took, her style remains uniquely her own. 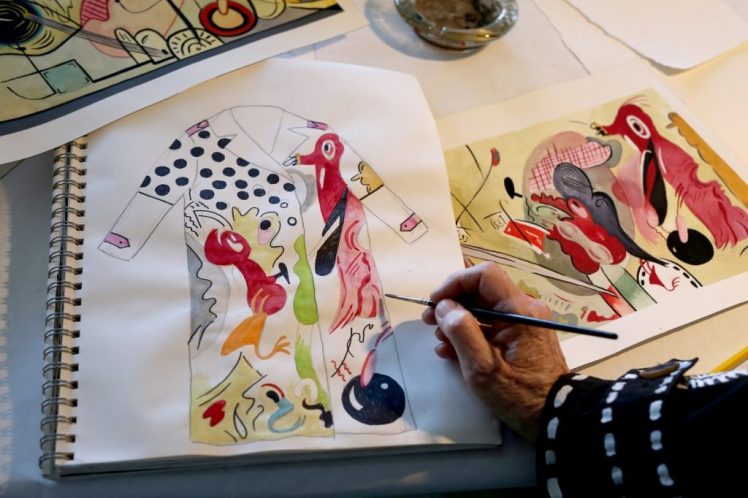 To the brain, watch eyeballs google 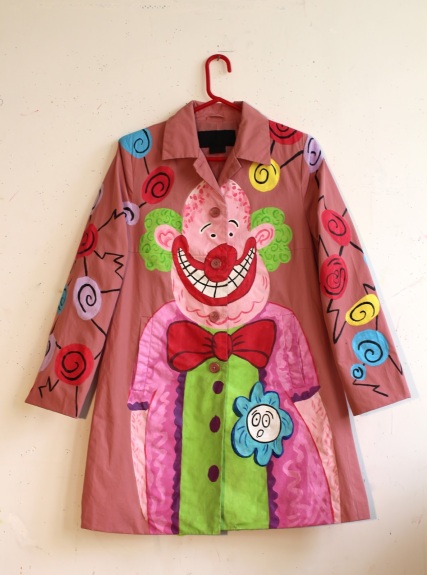 To the ball of yarn. 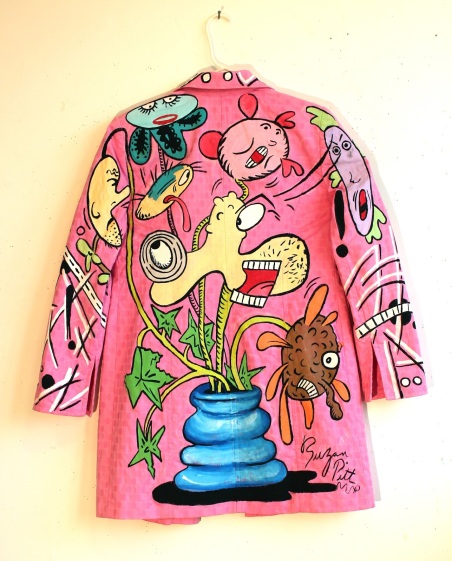 The mechanistic is replaced

All our molecules dance 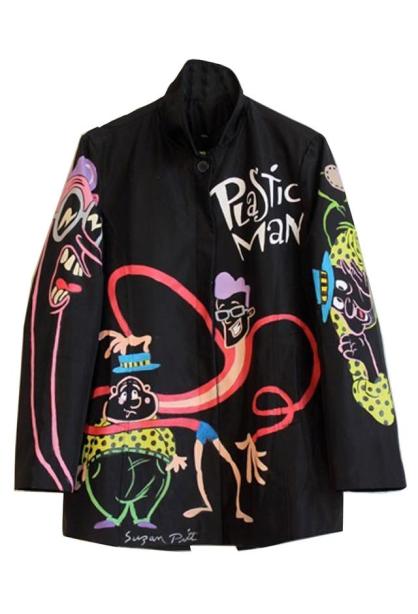 Light in the laughing colors.

Life is a choice 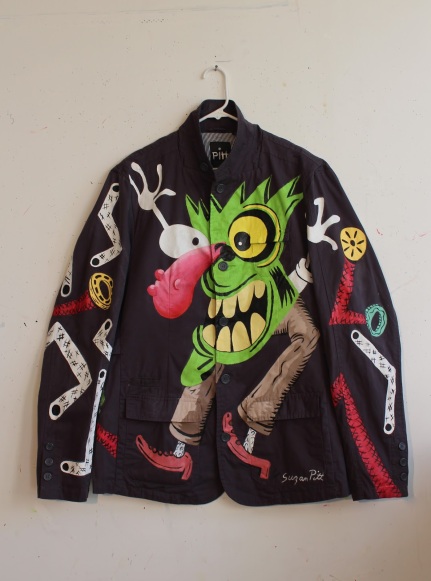 Suzan Pitt, who created phantasmagorical worlds in ingenious animated films that dealt with miracles, mortality, depression and women’s sexuality, died on Sunday at her home in Taos, N.M. She was 75.

The cause was pancreatic cancer, said her daughter-in-law, Laura Kraning.

In a diverse group of experimental short films like “Asparagus,” “Joy Street” and “El Doctor,” Ms. Pitt pursued an idiosyncratic vision influenced by Surrealist artists like Leonora Carrington, the pioneering animator Max Fleischer’s cartoons (notably with Betty Boop), underground comics and, most of all, her interior world.

“She put her undiluted, unadulterated, uncensored dreams on the screen,” John Canemaker, an Academy Award-winning animator, said in a phone interview.

“I wanted the film to mirror the way we daydream,” Ms. Pitt said on her website, with “each image leading to the next, the mind unfolding, constantly giving birth.”

Janie Geiser, an experimental filmmaker and performance artist, remembered first watching “Asparagus” at the Roxie Theater in San Francisco, where it was shown along with the film she had come to see, David Lynch’s surreal “Eraserhead” (1977). Seeing “Asparagus,” she said, helped steer her toward animation.

“The sumptuous color, the sense of observation, the sensuality and the details in each painted frame were like nothing I had ever seen,” Ms. Geiser said by email. “The film was like a fever dream; and like a fever, it was contagious.”

Ms. Pitt’s animation was done without a computer; each frame was hand-painted and drawn, and 12 different images were required for every second of film. Each project required years of planning, storyboarding and experimentation, helped by a team of artists paid through grants; Ms. Pitt never had the backing of a major studio.

In “Joy Street” (1995), she told the story of a china mouse that comes alive from its perch on an ashtray to save a despondent woman living in a dark apartment. Mutated to a size larger than the woman, the mouse carries her down a fire escape and into a park that turns into a rain forest alive with monkeys, butterflies, ants, frogs and gloriously colorful flora.

The woman awakens to this strange new world’s pulsating life. Her blue eyes glow. And when the jungle reverie ends, she opens her eyes in her apartment, smiles to see the mouse dancing, then happily flings open her windows to observe the outside world anew.

Years earlier, Ms. Pitt, in the throes of a deepening depression, found solace in the rain forests of Mexico and Guatemala; the hallucinogenic paintings she made there inspired the scenes from “Joy Street.”

Suzan Lee Pitt was born on July 11, 1943, in Kansas City, Mo., to John and Belva (Baughman) Pitt. Her father owned a tire store and mechanic shop; her mother was a homemaker. As a girl, Suzan imagined her dolls and toys as objects that could talk, fly and climb mountains — flights of fancy that she never wanted to squelch.

“As you grow up you’re expected to take all that and make it disappear into the closet,” she said in an interview with Mr. Canemaker in Funnyworld magazine in 1979. “What happens to that impulse, that drive to transfer what you see around you into playthings?”

Ms. Pitt attended the University of Alabama for two years before moving on to the Cranbrook Academy of Art in Bloomfield Hills, Mich., where she studied painting, graphics and printmaking. She graduated in 1965 with a bachelor of fine arts degree.

Though she never completely stopped painting, the impulse to animate her imagery tugged at her. She would say that her paintings felt “arrested in time.”

One of her earliest animated films, “Crocus” (1971), uses drawings and cutouts in a story about a couple’s family life; when they make love, birds, flowers, cucumbers and a Christmas tree float in and out of the room until a child’s cries end the parade.

Ms. Pitt made several other films after “Asparagus,” her breakthrough, including “El Doctor,” a 2006 film, set in Mexico, about an old doctor who encounters miracles on his last day on earth. The critic Robert Abele, writing in The Los Angeles Times, praised the film as a “trippy, magic-realist expedition” where “squirmy human (and nonhuman) forms wiggle in the frame like a bacteria party in a festive petri dish.”

The screenplay for “El Doctor” was written by Ms. Pitt’s son, Blue Kraning. He collaborated with his wife, Ms. Kraning, on a 2006 short documentary about his mother, “Persistence of Vision.”

Ms. Pitt was also known for the fashionable hand-painted coats she created (and sold), using images from her films and popular culture. And her animation film work was used in the set designs of two operas, Mozart’s “The Magic Flute” and Berlioz’s “The Damnation of Faust,” both staged in West Germany in the 1980s.

Ms. Pitt, who received a Guggenheim Fellowship in 2000, taught animation at Harvard and the California Institute of the Arts in Santa Clarita.

In 2017, the Museum of Modern Art in New York presented five of her restored films, continuing a relationship with her that began in 1979 with a showing of “Asparagus.” Josh Siegel, a film curator at MoMA, said in a phone interview that Ms. Pitt had thrived as an independent filmmaker “entirely because of her singular vision, her sense of humor and her wicked, subversive aesthetic.”

Ms. Pitt is survived by her son; her sister, Melinda Carlton; and her brother, John. Her marriage to Alan Kraning ended in divorce.

Her final film, “Pinball” (2013), sets her largely abstract paintings — which flash by in a whirl of imagery — to music that George Antheil composed for Fernand Léger’s film “Ballet Mécanique” (1924) and subsequently revised.

“Think of ‘Pinball,’ ” Ms. Pitt said on her website about this seven-minute movie, “as a spinning flying saucer which lands in your yard, performs, and then flies away to the sound of film flapping in a projector.”