“The Masque of the Red Death” from Extraordinary Tales (2015) This concluding sequence, from Spanish director and animator

’s collection of five tales from Edgar Allen Poe, remains my favorite cinematic version. As Jeannette Catsoiulis wrote in her New York Times review, “…the rosy wash of oily color that flows over the story’s plague-stalked revelers gives them the appearance of having been dipped in blood.” That artistic design, according to Raul Garcia, came from his love of Egon Schiele and Breughel. The music for this segment, composed by Sergio de la Puente, evokes period music that was Medieval/Renaissance. Roger Corman became the voice for Prospero. Nine years in the making, Raul Garcia accomplished an extraordinary homage to the macabre in all these tales.

I have seen all the pictures on the evening news.

Nor snakes, frogs, or turtles flavored with quince.

Stressed to cancel the annual haji.

Play an empty stadium in Burgandy.

Now art is quarantined inside the Louvre.

Wall Street’s afraid this disease can be spread

On all traded goods, so profits went dead.

There is no safety wherever we go,

Not even in the palace at Mar-A-Lago.

What consolation does research supply? 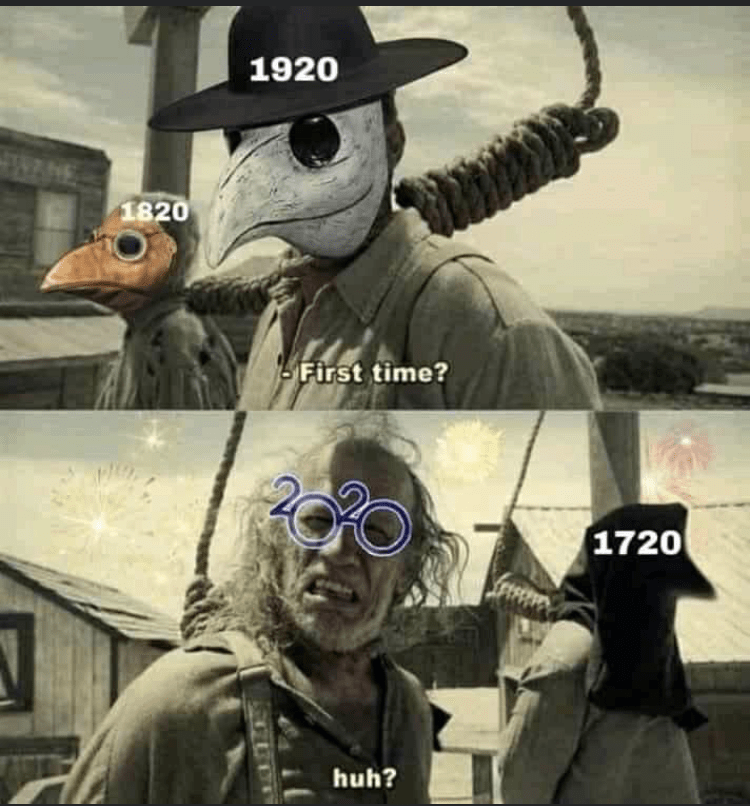 FROM “What Can the Coronavirus Teach Us?” By Bill McKibben

There’s nothing good about the novel coronavirus—it’s killing many people, and shutting millions more inside, with fear as their main companion. However, if we’re fated to go through this passage, we may as well learn something from it, and it does strike me that there are a few insights that are applicable to the climate crisis that shadows all of our lives.

Some of these lessons are obvious: giant cruise ships are climate killers and, it turns out, can become floating sick wards. Other ideas evaporate once you think about them: China is producing far less carbon dioxide, for the moment, but, completely apart from the human toll, economic disruption is not a politically viable way to deal with global warming in the long term, and it also undercuts the engines of innovation that bring us, say, cheap solar panels.

Still, it’s worth noting how nimbly millions of people seem to have learned new patterns. Companies, for instance, are scrambling to stay productive, even with many people working from home. The idea that we need to travel each day to a central location to do our work may often be the result of inertia, more than anything else. Faced with a real need to commute by mouse, instead of by car, perhaps we’ll see that the benefits of workplace flexibility extend to everything from gasoline consumption to the need for sprawling office parks.

Of course, that’s a lesson that can be learned in reverse as well. The best excuse for an office is people bouncing ideas off one another, and the best excuse for a society is just people bouncing off one another, something that’s getting harder right now, as events start cancelling. But the “social distancing” that epidemiologists now demand of us to stop the spread of infectious diseases is actually already too familiar to lots of Americans. Living lives of comparative, suburban isolation, we already have fewer close friends than we used to. (Health-care authorities warned, on Thursday, of a serious epidemic of loneliness, which older Americans are more vulnerable to. The research shows that, when controlling for all other variables, older Americans who reported being lonely are twice as likely to die prematurely than those who aren’t.) But the patterns that produce this solitude in our culture are so ingrained that we’ve come to take them for granted. Perhaps, in an odd way, the prospect of forced isolation may lead us to embrace a bit more gregariousness when the virus relents. I can’t imagine what it’s like to be penned up in a Wuhan apartment; I can guess, though, that liberation will feel sweet when it comes, not only because people presumably will be safe but because they can be social. A certain kind of environmentalist has long hoped that we’ll learn to substitute human contact for endless consumption; maybe this is the kind of shock that might open a few eyes. (Also, strained global supply chains are a good reminder that local agriculture has very practical benefits.)

This might also be the moment when we decide to fully embrace the idea that science, you know, works. My grandfather was, for many decades, doctor to the tiny town of Kirkland, Washington, now a suburb filled with software execs, which has turned into an American coronavirus ground zero. So I’m thinking frequently of the brave nurses and paramedics carrying out front-line care, and also the researchers who have scrambled with remarkable speed to produce prototype vaccines. Élites seem a little better when they come bearing cures. And that should probably carry over to other realms: Americans, polling shows, are wary of Trump’s cavalier disregard for reality when it comes to global warming; now he’s claiming that the virus is a hoax, as well. Given his contention that maybe a “miracle” might make it “disappear,” I’d expect that skepticism to keep growing.

And one would also expect a growing awareness that what happens elsewhere matters—that there’s no real way to shut out the rest of the planet. That’s true for the virus, which seems to have seeped through most of the world’s borders in a matter of days. It’s even truer, of course, for the CO2 molecule. Not even a guy in a hazmat suit, clutching a temperature gun, can slow down the warm air cascading up to the Arctic, or the hurricane headed across the Atlantic. So maybe it’s a moment when we remember that coöperation with the rest of the world is a boon, not a trap.

Above all, I think, a physical shock like COVID-19 is a reminder that the world is a physical place. That’s easy to forget when we apprehend it mostly through screens, or through the cozy, contained environments that make up most of our lives. We seem to have a great deal of control, right until the moment that we don’t have any. Things can go very, very wrong, and very, very quickly. That’s precisely what scientists have been telling us for decades now about the climate crisis, and it’s what people have learned, from Australia to California, Puerto Rico, and everywhere that flood and fire has broken out. That planets get sick slightly slower than populations do—over a few decades, not a few weeks—doesn’t change the basic calculation. Biology doesn’t really care what we think of it, any more than physics or chemistry does. Reality is capable of biting, and biting hard.